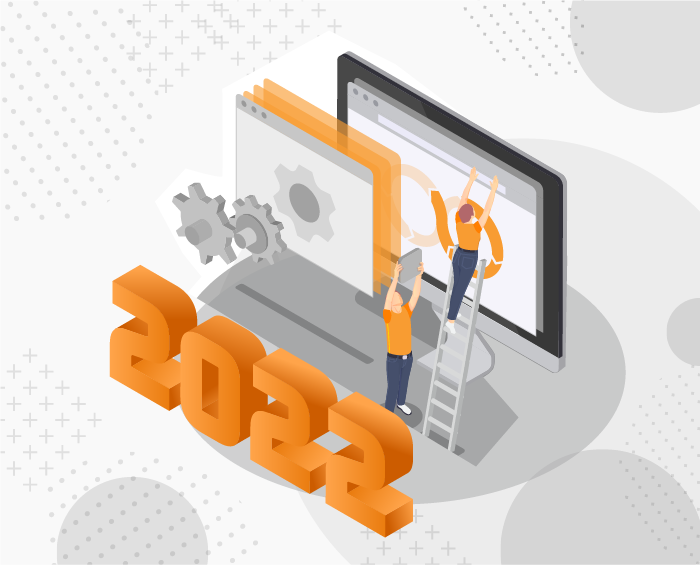 2022 is right around the corner. So let’s now wait for LinkedIn or other HR platforms to tell you what prospective employers are looking for. Here’s an insider web developer skills checklist for 2022. Some items we’ve listed are good for all times. Others really have to do with tech industry trends. The analysis is based on research and experience of Flux Technologies’ own developers. Check it out:

HTML is a golden oldie. Even though we consider it one of the oldest forms of web technology, it still finds its relevance today. In fact, it’s hardly possible to be a developer without it. Markup specialists also need this to specify the structure of their page.

But why do you really need HTML? The answer is because it can really help you when you troubleshoot and debug. (It’s a bit like learning Latin…you’ll probably never hear it spoken anywhere, but you can understand many languages with it.)

Good command of HTML5, for example, can yield up to $54,000 a year in countries like the Netherlands.

Thinking about revamping your HTML skills? You might try the courses available on W3Schools Online Web Tutorials. They also do a great job covering CSS, Javascript, which is also on our wishlist for next year’s must-haves.

These skills are absolutely necessary for Front-end Developers. Markup Specialists find CSS essential too. They use it both to establish the layout and give it an aesthetically pleasing appearance. According to ZipRecruiter, the average front-end developer salary differs based on the demand for a certain web developer skill. The average front-end developer salary of specialists with CSS and HTML5 is approximately $87,605 in countries like the US. This goes to show that no web developer skill should ever stand alone. Therefore, always think in terms of combinations when adding on new skills.

Today, CSS usually combines with Bootstrap, Materialize, and Tailwind CSS. CSS allows websites to be interactive. By comparison, responsive web design lets you adapt your website according to the size of devices visitors use.

Most UI/UX designers will tell you that responsive web design courses are part of a more comprehensive CSS course. That’s why there are endless resources on Youtube that can provide you with targeted insight. It’s also worth mentioning that CSS is constantly evolving. So it’s always worth checking for what’s new. CSS is full of surprises and new features.

Cybersecurity as a Web Developer Skill

With more and more businesses going online, threats and vulnerabilities go online too. The web has become the new battlefield for theft and those looking to extract information. This has brought cybersecurity front and center in the wake of the pandemic.

That’s why it’s no surprise that IT professionals that have security certifications typically are eligible for higher salaries on average. According to Global Knowledge, this group ranks salaries of over 15% higher than your average techy. So you might consider getting certified in either cybersecurity, network security, information security, or vulnerability assessment.

An algorithm, though may sound intimidating, is nothing but a set of steps to solve a problem. All actions performed by a computer are related to information (storage, processing, transmission, etc.). Therefore, in order for algorithms to be effective, it’s important how that information is stored. And the way information is stored on computers is through data structures.

Understanding data structures and algorithms mean knowing the solutions to standard problems and general directions. It’s also helpful for developers to have a good understanding of process tools like the Big O notation.

This skillset is especially useful if:

No matter what kind of problem you are dealing with, algorithms and data structures will allow you to solve the problem quickly in the most optimal way possible.

Design patterns have been around probably since the dawn of man. We see it in everything from clothes and buildings. In 1994 however, Erich Gamma, Richard Helm, Ralph Johnson, and John Vlissides applied the idea of design patterns to the world of software development. Initially, they introduced 23 object-oriented variants. Since then design patterns have remained an integral part of development. Their original catalog included patterns like Proxy, Singleton, and Decorator along with others. These have long since become part of any developer’s vocabulary and skillset.

The purpose of a design pattern is to describe a repetitive problem and the solution. The solution must be described in a way that allows developers to apply it uniquely many times.

Take the example of a proxy. A proxy is a structural design pattern that allows you to provide a substitute or placeholder for another object. It controls access to the original object, allowing a developer to perform something either before or after the request gets through to the original object.

And why did we choose to list something this fundamental? Because knowledge of design patterns seems to appear on the list of requirements for most Java engineers and not knowing it would hurt your chances when you apply for these positions.

Yep. We’re continuing to bring out all the classics. It’s very hard to imagine the Web without JavaScript. Almost all websites rely on their interactive nature to attract users. JavaScript helps your webpage be interactive.

Everything from clicking a button to animation to pretty much anything that happens when your user moves their mouse around is all backed by this programming language. But that’s just the tip of the iceberg.

JavaScript has continued to evolve so much that it is now even possible to create an entire web application from start to finish with just one language. And even though JavaScript is mostly used for frontend purposes, Node.js is also a close relative that is used for the backend and the combination of these two make it possible to create an entire website or web app with one language.

According to PayScale, JavaScript coders come in at the second most well-paid type of front-end developers with average salaries at approximately $74,000 per year in the US.

As promised in the point above, Node.js is next on our wish list. Node.js is an open-source, cross-platform, back-end JavaScript runtime environment that runs on the V8 engine and executes JavaScript code outside a web browser. It allows developers to use JavaScript to write command-line tools and for server-side scripting—running scripts server-side to produce dynamic web page content before the page is sent to the user’s web browser. Thanks to Node.js, developers no longer need to use different languages for server-side and client-side scripts. This is the main advantage of using Node.js in web app development: it expands the horizons of JavaScript functionality, allowing developers to integrate the language with APIs, other languages, and external libraries.

Some major corporate users of Node.js software include IBM, LinkedIn, Microsoft, Netflix, and PayPal, which means having good knowledge of this language can go a long way to applying for a position at these major companies.

Most developers are more than familiar with single-page applications, but just in case, here’s a refresher: A single-page application (SPA) is a web application or website that interacts with users by dynamically rewriting the current web page with new data derived from the web server, instead of the default method of a web browser loading entire new pages. The objective is to make faster transitions that in turn give the impression of a native app.

Keep in mind that with SPAs, the page refreshes never happen. Instead, all necessary HTML, JavaScript, and CSS code are either retrieved by the browser in a single page load or the appropriate resources are dynamically loaded and added to the page as necessary, typically depending on what actions a user takes.

To develop a SPA you will most likely either need to use React.js, Vue.js, and Angular.js. As a reminder of just how relevant these web developer skills are to your career, some of the most visited and known single-page applications include Facebook, Twitter, as well as Gmail, Google Maps, and Google Drive.

Git is an open-source version control system, making it maybe even more of a meta-skill, but nonetheless important. Is used to track changes made to both open source and commercial projects by almost all developers which is why we’ve included it on our list.

The process of creating a website is hardly a one-man job. It usually involves a team of developers, project managers, QA engineers, business analysts, and other stakeholders. It’s also important to keep in mind that any given web application developers are working on has to be released in relatively short delivery cycles. This is why developers make changes to several files at regular intervals.

To keep track of changes and ensure a cohesive workflow, developers use version control systems. These changes made to individual files are recorded so if a programmer needs to recall a specific version of the file, they can.

Chrome Developer Tools are a major go-to for frontend developers. With nearly 70% of the internet being surfed via Google Chrome, its importance has increased immensely. Use Chrome Developer Tools to view raw HTML/CSS/Javascript libraries, make changes to the CSS classes, and tweak the look of the webpage.

And while the ability to create web applications or websites is great, there will always be bumps along the way and the more proficient you are in being able to troubleshoot them, the more attractive you are to prospective employers.

This comprehensive toolkit is a great place to start but by no means a place to end. IT is an industry that is constantly evolving, improving, and learning, which are the best traits for any programmer. The trick is to combine several web developer skills and make yourself as universal as possible. This will give you the upper hand when applying to new positions.

Let us know what web developer skills you find essential and what courses you took to master them in the comments below.

6 Benefits of Working with a Software Development Company

The struggle for startups and entrepreneurs trying to make their dream a reality is real! The market is full of software development companies and freelancers....

Developers are pioneers in tech innovation, so they’re always looking ahead. At Flux Technologies, we’re no different. We’re always on the hunt for future web development...

Self-Testing by Developers. The Hot Potato

Testing is for QA engineers, right? Nevertheless, we find it to be an essential part of developers’ work as well. Self-testing often raises controversial questions...